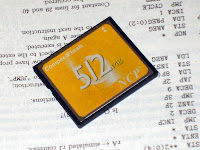 There was an important event this week at the workplace and we had called in a photographer to take some snaps for the press. After the event, to his horror, he finds that his card won’t open on any computer. Pretty scary huh? He seems to have used a pretty old card and though the card still showed all the images in his Nikon camera, it wouldn’t mount in any card reader. Directly connecting the camera with the cable didn’t work either. A dmesg run on ubuntu showed lots of IO errors, which seemed to be physical damage on the storage area. Since the errors were clustered near each other I was sure that the entire card was not a write-off. Well the event was quite important so I had to find a way to get the images out of the card.

A bit of googling got me lucky. Zero Assumption Software has a product called Zero Access Recovery (Download Link) which, though it is a trial version, has the photo recovery part as a fully functional component in the trial version. So technically the photo recovery software is freeware. The software first asks you to select the card, (I put the card in the card reader and though windows couldn’t mount it, it kept running autorun repeatedly some reason), scans it for damaged areas (this takes ages…) and then lists all files which can be recovered. Be prepared for a long wait though. It took me 1 1/2 hours for the 512 mb card. The software even lets you make a disk image of the card, but I couldn’t figure out a way to use the image.

More luck and I was able to recover most of the photos losing only three of them. And the photographer was actually quite impressed with my ‘technical prowess’ as he called it. Well, that is one satisfied user.

One thought on “Recovering Files from Damaged Camera Card”